When I woke up to get ready for our excursion, we had already docked in St. Thomas. The excursion we had booked was the Sapphire Beach Island Drive. Overall, it wasn't all bad, but reviews for this excursion were pretty harsh. Now I'm not expecting limo service, but our shuttle was pretty ghetto like everyone else said. It was a long, and dangerous 20 minutes on the narrow, steep roads of St. Thomas. We arrived at the beach to discover the resort was under renovations, which meant a lot of shoddy looking buildings and a mystery food menu (we later discovered it was a BBQ station hidden behind the hotel). The water at Sapphire Beach was cool and it was mostly calm, but there were enough waves and movement for the water to become cloudy. We had complimentary snorkeling gear, but the cloudy water made it difficult for us to be able to see anything underwater. 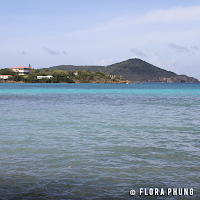 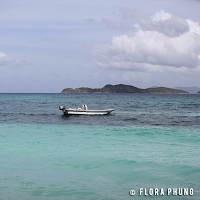 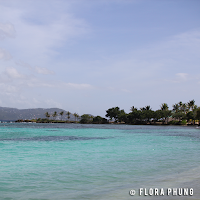 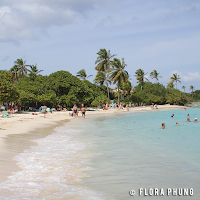 Look at that! Not one single soul on the beach! Just kidding. There were tons of beach folks to our left. We were second cruise group to arrive, and there were a few vacationers, but it did not feel crowded at all. We lounged on the beach, and I read a book as the boyfriend slept.

On the way back, our driver stopped at this popular peak for us to take photos. You can see three ships docked on the left side, Havensight. Oasis docked on the far right, at the lousy dock, Crown Bay, with no stores. But what a view it was! It was just breathtaking. We requested to be dropped off in downtown, and we grabbed lunch at a Greengos. It was quite expensive as we only ordered two quesadillas with water. Our bill was $35 USD after tip due to the mandatory 18% gratuity. After a short walk around the block, we took a taxi ($4 per person) back to the terminal. As we waited to board the ship, we were entertained by the street art on the ground. 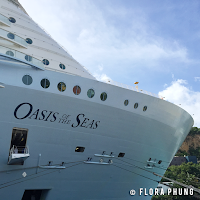 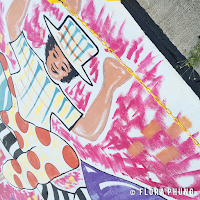 We stayed in the dining room for dinner that night. Our server surprised us with a Jamaican goat curry. The featured dish of the night was chicken gyoza, which was surprisingly delicious. However due to bad presentation, I don't have a picture of the dish. The boyfriend thought it was freshly made on board, but I thought they were store bought frozen gyozas. I guess we'll never know! 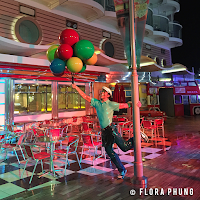 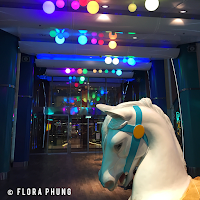 After dinner, we walked around the Boardwalk again. We like to get in a quick walk - and a breath of ocean air every night after dinner. At that time, it is often way too windy on the upper decks, so the Boardwalk was perfect for us. Our entertainment of the night was a late night comedy show featuring Kivi Rogers, and another comedian. Unfortunately, I do not remember the name of the other comdeian, but Kivi stole the show. He kept us in tears the entire time.

Day five was another port day at St. Maarten, one of my favourite ports. I'll be back soon to tell you all about it. Hope you're enjoying my trip report, stay tuned!