The next day, we visited the Old City of Shanghai. The first attraction we visited was Yuyuan Garden. Yuyuan Garden is a classical Chinese garden. The garden has beautiful greenery with many grand stone sculptures, and classic Chinese architecture. There is a beautiful pond with koi fish in the middle of the garden. Koi fish attract good luck and fortune, which is why the Chinese hold such a high regard for these fishes. At the time of our entrance, the admission fee was 10 RMB. The garden is inside the bazaar. The bazaar is a maze but the garden is not hard to find as there are signs that lead you there. 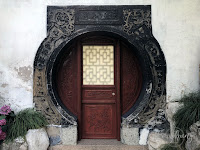 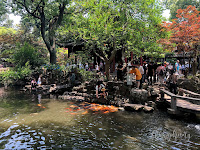 One thing we missed at the Old City was afternoon tea at the Huxinting Teahouse. It is Shanghai's oldest teahouse, located by the Yuyuan Garden. If you plan to visit, I suggest making reservations ahead of time!

We also walked around the bazaar surrounding the temple and garden. The marketplace sold local souvenirs and snacks. We stopped by a well known dumpling store, Nanxiang Mantou Dian, to try out their xiaolongbaos. Shanghai's best known snack food is the xiaolongbao, or quite simply XLBs. These little dumplings are filled with hot soup and a pork filling; they are traditionally steamed in a bamboo basket. We also visited the City God Temple, with the admission price of 10 RMB.

After spending the whole day in the Old City, we decided to head to the Oriental Pearl Tower next. The Oriental Pearl Tower is located across from the Bund, on the other side of the Huangpu river. The tower had a revolving restaurant and an observation deck with a glass-bottomed skywalk for visitors. You can purchase different tour packages to visit the tower online or in person. We opted not to go inside as we didn't have much time. The tower is brightly lit in different LED sequences at night, so we spent some time watching the light show.

There are also several malls in the area, and Shanghai's flagship Disney store. We walked around the area and visited the Disney store, but soon found ourselves hungry. There weren't a whole lot of good food choices, and the restaurant (Din Tai Fung) we had wanted to go in the area had unfortunately closed down. We ended up grabbing something mediocre in the mall to fill our tummies.

After two fun-filled days in Shanghai Disneyland, we headed into the heart of Shanghai for two days.

Cabs are extremely inexpensive in Shanghai, and we found ourselves often taking the cab instead of the Metro in the interest of time. Although, the Metro was also very easy to use and extremely efficient.

We arrived to the Intercontinental early so we dropped off our luggage, and decided to explore the area. Intercontinental is located in the heart of Shanghai's financial district, about a 10 minute Metro ride from the Bund. Our hotel was farther away from the waterfront, but we had a better rate staying further away from the Bund. The hotel was also older, but the rooms had been renovated in the past few years. I really enjoyed their breakfast - we had fresh juice every morning! We were on one of the higher floors too, so we had a nice view of the area as well. We stopped for a quick lunch at Yang's, then headed to Tianzifang, a touristy shopping area in the French Concession area of Shanghai.

After some browsing and more eating, we made our way to Nanjing Road. Nanjing Road is one of the busiest shopping streets in the world. The shopping area extends from People's Square to the Bund. We walked along the street until we finally reached the Bund.

We waited until after sunset so the city lights were bright. We spent around an hour at the Bund to take photographs. It takes quite a bit of patience and a little bit pushing to get to the waterfront. Here's what you see online vs. the reality of the crowds.

Afterwards, we had dinner at a restaurant near the Bund. It was a long wait, so we ended up having quite a late dinner. We walked back to Nanjing Road to catch the Metro back to our hotel, and grabbed dessert at McDonald's along the way. We had a slow day, but we needed it to ease ourselves back into the hustle and bustle of the fast paced city life.