Disclaimer: There is a currently a travel advisory issued against all non-essential travel due to the coronavirus pandemic. The Government of Canada and the State Department have advised all Canadians and Americans to avoid all non-essential travel due to the ongoing COVID-19 outbreak. In addition, all major cruise lines have suspended operations around the world until at least mid-April. I am not promoting any travel during this time. Please do not travel. I am just sharing my past travels and continuing to work on my blog while we are all practicing social distancing. If you are reading this, stay safe and healthy out there. Take care of yourself and each other.

There are many places in China we wanted to visit but we only had two weeks, and with it being our first trip to China, we decided to take it easy. After our must-visits (Shanghai Disneyland and the Bund), we decided to set sail on a cruise. We chose a seven-day Royal Caribbean cruise to Japan; it was our first time in Japan as well.

We didn't have high expectations for the cruise. We had heard a lot about cruises in Asia, both good and bad. It's important that you do your research carefully before you head on an Asian cruise. A cruise in Asia is entirely different than a cruise in the Caribbean. The cruise is catered to the Chinese. The culture on the ship is entirely different. I don't want to discourage anyone from going on an Asian cruise, but I do want to make people aware of the cultural differences. As I've previously mentioned, my husband and I were not as affected, as we come from an Asian dominated Canadian city, and we are ourselves are of Asian decent, so we were familiar with the cultural differences.

Transportation: It was a long trek from the heart of Shanghai to the port of Baoshan, at about 75 minutes, but the taxi was cheap at around $25 - $30.

Embarkation: Because we were Emerald members, we were able to embark quite early. We were so happy to be able to do so, because we walked by a line of at least a thousand people lining up (in the heat) to embark.

Ship: We had wanted to sail on the Quantum class at some point in our lives. They mostly sail in Asia so we were thrilled to get the chance to sail on it. The ship was still pretty new, and in good shape. The Quantum is the 7th largest ship in the world, but it didn't feel nearly as big as the Oasis, but not small like the Navigator. We had a cove balcony stateroom with plenty of cabin storage. On that note, I loved our cove balcony! It felt private and it was very quiet. 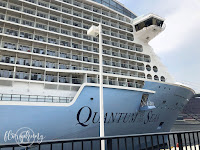 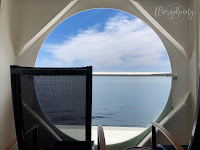 Crew: The crew spoke some English, many understood what we were saying but had trouble speaking. Our stateroom attendant was great. He cleaned our room quickly. We didn't see much of him, but when we asked for anything, he delivered.

Activities: There's a chance to give acrobatics a try at the SeaPlex. There are a lot of activities such as bumper cars (shown below), rock climbing, the North Star (for a fee; shown below in action), RipCord by iFly (skydiving at sea for a fee; shown below), and of course, the FlowRider and much, much more. Tip: Book the North Star as soon as you get on the ship, we made the mistake of not doing so and it booked up fast for the rest of the week! We were bummed about that.

Entertainment: The shows are in Mandarin, but were all very entertaining and wonderfully performed. We especially loved Starwater, a visual production with robotic light technology and human choreography. There is also the casino. My husband likes to gamble, but it closed early almost every night.

Food: Dynamic dining with no set dining times, no assigned seats, and no formal nights. It was chaotic. The Chinese line up super early to get in the dining room. There are two seatings, and both have long lines. On any given day, we would wait at least thirty minutes for a table. You get a different table and a different server every night, and the menu is largely a variety of different Chinese cuisine. We aren't familiar with Northern Chinese foods, and we did try some, but we weren't a fan. We enjoyed the Southern Chinese food because it was what we were used to at home. We didn't know there was a Western menu until Day 4. The buffet was great as well, although they mostly served the same foods during the week. It was typical for long lines at the buffet, and to wait in line for the buffet, only to have someone cut in in front of you to get food. A simple (but stern) "excuse me" may get the offender to tuck their tail in between their legs and scurry away, but not always. On our last night, we were invited to Chops Grille for complimentary dinner. It was a lovely break from the crowds and the meal was superb!

Disembarkation: We strolled off the ship and grabbed a taxi back into the city. There are a ton of taxis at the port, and only the Westerners take it. The locals all get picked up.

Ports: I saved the best for last. The ports were the whole reason why we wanted to go on this cruise. Japan was on my wish list for a long time, we didn't think we would be able to visit anytime soon so we decided on this cruise to get a taste of Japan. The ports of call were Osaka, Kobe and Yokohama. All are major cities and there were so many things to do at each one. I'll be getting into what we did at each port in more details in my next few posts!