The next day, we visited the Louvre. The Louvre Museum is considered the world's greatest art museum, and one of the most iconic monuments in Paris. You probably need more than a day to explore the museum, and we only had three hours. We went mid-morning and were met with an average queue through security. We did not purchase tickets in advance, but found that the queue for tickets was much less daunting than others had warned us about. There were about 5-7 people in the line with us, and it moved quickly. The Louvre was intense. We didn't know where to start, and wandered in an area.

We made it though all of the Main floor, through the Roman, Italic and Etruscan, and Greek Antiquities. We also walked through the rooms with paintings from Great Britain, USA, Spain, Italy, France and Decorative Arts of Europe. 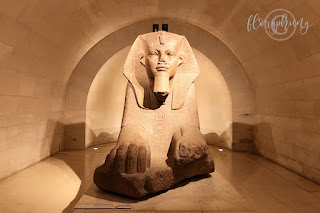 We eventually made it to the Mona Lisa, the main attraction of the museum, in between the paintings of France and decorative arts of Europe. It was not easy to find. By that time, our three hours were up and we were tired. The air flow and circulation was difficult to withstand inside the museum. I fully understand the climate had to be regulated to conserve and house the artwork. However, but with the crowds, it was very uncomfortable for us in the museum. It was hot, dry and stuffy so it was time to leave.

We had a few more "must-see" places on our list, so we jumped back on the HOHO bus to Sacré-Coeur Basilica. On the way, we passed by the Moulin Rouge, a cabaret. The bus stop (or even subway stop) is nowhere near the basilica. Sacré-Coeur is located at the summit of Montmartre, which is the highest point in Paris. It was a 15 minute uphill walk to the foot of the basilica, and another 10 minutes to the entrance. Quite the workout!

We ran into the annual Grape Harvest Festival in Montmartre taking place just outside of Sacré-Coeur during our visit. Northern Paris is the only place in the city where vineyards are still grown. It was very lively, and locals were enjoying the food and drink. However, the crowds made it difficult to move around, so after trying a couple of local foods, we made our way back down to the bus.

Our bus ride was short as we headed back to our neighbourhood, the Marais, to shop for a little while before dinner. It was our last night in Paris and we had our eye on a restaurant we wanted to try. We had lost track of the dates, but it just so happened to be our dating anniversary.

We ended our last night in Paris on the perfect note, with memories of the best French food and a delicious scoop of gelato. We had lost track of the dates at that time, but it just so happened to be our anniversary date.

We had a magical time in Paris, and three days was not enough! We hope to visit again in the future, there are still so many places we didn't get to visit: Mont-St-Michel, Normandy, and Disneyland Paris. Here's to hoping it won't take me another twenty-seven years to go back... Until next time, Paris!
Posted by Flora at 19:26 No comments: