This cruise is running long, eh? I don't blame ya, it was a 14 day cruise - a lot of ports, and a lot of sights to see! But here we are, the last port for us.

We weren't expecting much from La Coruna. We were at the end of our cruise, and ready for Paris, so we just wanted a mellow day around town. We were happy to be back in Spain as they are known for their tapas. We discovered so much within the medieval old town in the Plaza de Maria Pita and the narrow alleyways. We found great food, beautiful coastal views and so much culture in the little, but long seafront city in northern Spain.

We grabbed lunch along the pier at a busy restaurant; fresh scallops and octopus. If we had more time, we would have spent more time in the city. Instead, we chose to walk along the pier with our ice creams.

We had two lunches and two desserts during the time we spent on La Coruna. We stopped for razor clams at another restaurant, and Spanish churros with chocolate sauce, a traditional dessert.

La Coruna reminded me why we cruise. This is what I love about cruising. We would never be able to visit these charming towns if it weren't for the cruise. It is through cruising that we find these beautiful places, and get the opportunity to live as locals for a day.

As the sun set, we sailed away and caught sight of the Tower of Hercules. It is an ancient Roman lighthouse on a peninsula at the tip of Galicia. The Tower of Hercules is a National Monument of Spain, and it is a UNESCO World Heritage Site.

We ported in Funchal, Madeira on a Sunday. Madeira is an island of Portugal situated in the Atlantic by the Canary Islands.

We didn't have much planned for Madeira but we had read about the crazy toboggan ride down Monte, a must-do attraction in Funchal. However, because it was a Sunday, the attraction was closed! We ended up taking a bus into town, and came across a huge mall. Unfortunately, that was closed due to an emergency evacuation! There was also a marathon along the waterfront, so most of the roads in town were blocked off. Just our luck! It just wasn't a great day to port.

We ended up stopping by a cafe for pastries and cappuccinos.

As we left the port, the rain clouds had arrived, and it started to rain as we sailed away.

We had a lovely dinner in the main dining room that evening. We were served a variety of popular Filipino dishes; lechon, pancit (my favourite!) and lumpia. 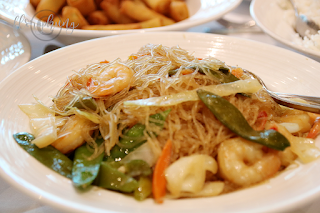 Next up, La Coruna, our last port before Paris!