Alex, our driver from George's Taxi, arrived promptly at 11:30 like he said, and we were soon on our way to the port. Alex told us the cruise port was a short twenty minute drive from our hotel in the Acropolis area - but it seemed much quicker for us to get there. I'm sure it was because we had such a great time chatting with him! Upon our arrival at the port, we unloaded and waited for a Carnival representative to grab a porter to take our luggage. In the Caribbean, the porters are everywhere, and you basically left your luggage at the curb. This time, it was much more organized - and safer. A Carnival representative was present to greet you, and appoint a porter to your luggage. It always gives me a peace of mind to see someone take my luggage.

It was starting to get crowded so we said goodbye to Alex and headed into the tent for check-in. We made it in line just before the rush. The passengers after us were seated, and given a number to be called for check in. Unfortunately, the tent was a furnace. It was a white tent - a green house essentially with four air conditioning unit, one in each corner - not enough! Thankfully, our check-in was quick, and our Carnival customer rep was also very friendly. Immediately after we were given our Sail & Sign cards, we were headed straight to the ship for boarding. I practically ran through the terminal. I was sad to say goodbye to Athens, but I was stoked for the ship! 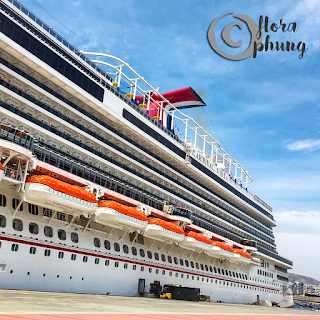 The Vista is a gorgeous ship. She was shiny, new, and ours for the 10 days! I'll have more pictures of her as we visit each port. As we boarded the Vista, we heard an announcement letting us know that our cabins were ready. Perfect timing! We were booked on a category 6M Oceanview at the end of the hall on Deck 3 (more on this later). These cabins had two bathrooms - one with a shower, and one with a bath. Only one toilet though, so we had to play nice. 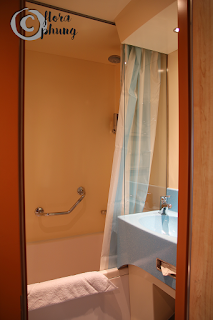 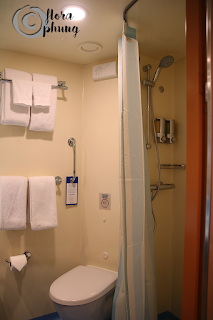 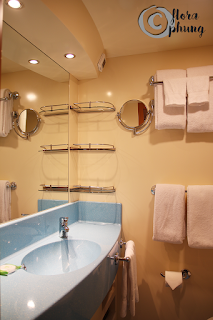 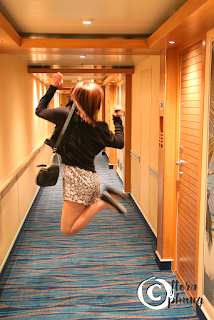 I had just stuffed myself with a gyro during boarding so I was in no rush to visit the Lido Deck. We decided to take a quick walk first to check out the ship. I'm sad to say that we never got a chance to go on the waterslides. It looked like a lot of fun, but the weather never really warmed up enough for us Caribbean cruisers. 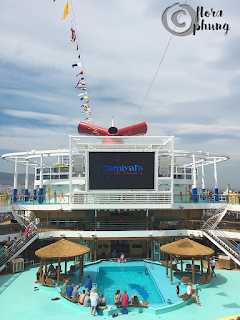 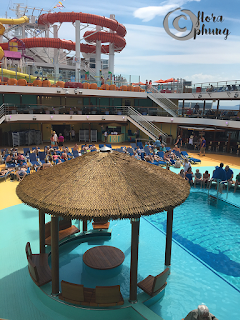 Here, we have the Red Frog Pub & Brewery, and some seating on Deck 5 - there is a Taste Bar to the right, and the Cafe on the left, both of which are not photographed (I know, I suck, sorry). They played Bingo here as well.

Here, we have the Skybar (sports bar) and the casino, where my boyfriend liked to spend his nights.

And here, we have the Reflections dining room, with the new American Table menu, which was still being prepped when we decided to peek in to find our table. Funnily enough, we were actually seated just around the corner by the second pillar in the photograph. We also popped by the Havana Bar, which we never used. It looked amazing though.

We headed up to the deck to watch the sail away. It was a very windy day, once again, in Athens, so I headed back inside as the boyfriend took some pictures. 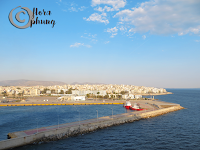 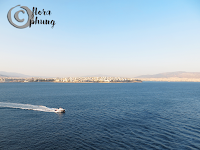 We had a late seating for dinner at 8:15 pm, so we took a quick visit for a snack on the Lido Deck before heading back to our cabin to unpack. We also decided to take a quick nap before dinner. This is our first cruise with a late dinner seating. The reason we chose it was because we were at port every day until at least 6 PM. We specifically chose this cruise, this itinerary because we were interested in each, and every port. We really didn't want to rush back for the early seating.

Because it was the first night of our cruise, we didn't expect much from the dining room. We had an unusual arrangement - two different headwaiters ended up serving us throughout the week. Imade from Bali made an impression on us. He was very friendly, and loved to joke with us. Our other headwaiter was Milo. His name tag said he was from Serbia, but he told us he was from Croatia. He was a quiet fellow, and didn't chat with us much during our time in the dining room.

Nothing jumped out at me on the menu, so I ended up ordering the chicken. The boyfriend ordered the steak. I had Vietnamese salad rolls to start (very hard, and dry - my family is from Vietnam, so my mom makes pretty awesome salad rolls. I could tell these had been made hours earlier. I understand appetizers are pre-prepped, so salad rolls were probably not a good idea, as the rice paper wrap hardens when its refrigerated), and he had the calamari (unfortunately, no batter as pictured). For dessert, he had the Carnival chocolate cake, which came in a cute arrangement of Mickey (How did they know! We absolutely love Disney!), and I had the tiramisu (very sweet!). It was really nothing to rave about, but it filled our tummies and we were content.

Embarkation day is always a little tiring for us. It takes us the day to settle into the ship. So like good boys and girls, we headed back to our cabin to unpack a bit more, and turned in early for the night. Our first port was Kusadasi, Turkey. As I had mentioned in an earlier entry, we were originally supposed to dock in Izmir, but unfortunately, because it was on the U.S. travel advisory alert list, Carnival cancelled the port. Kusadasi is great replacement. For those who still wanted to visit Ephesus, it was still an option. Since we had already been there before (see here!), we had planned to walk around the port, and do a little shopping... and of course, as some of you may know, search for my tartinis!

I hope you're enjoying my trip report. Stay tuned for my entry on Kusadasi this weekend.