Vista Vacation: The One Sea Day

Our one and only sea day was on Friday, day four of our cruise. We had a couples' massage booked first thing in the morning, and if y'all hadn't noticed, the boyfriend and I are not early risers. But it was the only time available, so that's how we ended up with the early appointment. As to how we came to the decision on a couples' massage (usually, I get one myself, and the boyfriend sits out)... Well, the couples' massage ended up being the same price as two single's Swedish massage so we thought, why not?

The spa was clean, and well air conditioned with a gorgeous vista of the ocean (see what I did there?). The staff were friendly, and prompt. We were greeted by our masseuses upon entering the waiting area right after I filled out our health questionnaire. We were booked in a serene couples' room with a jacuzzi, which I wish we could have used. Our massage was short, only fifty minutes, but very relaxing. The total cost? $286 USD with gratuities. It was expected, but if you are willing to wait for a better price (better price may mean less time or less services), the price does go down on port days. Just watch out for the spa staff handing out flyers when you board the ship at the end of your port day! 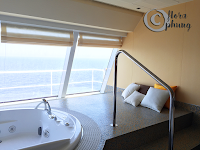 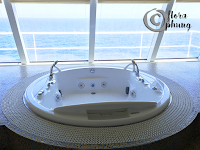 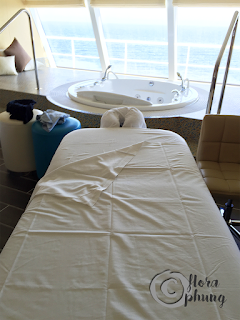 After the massage, it is customary for the masseuse to encourage you to purchase the products they used during the treatment. It's easy to get caught up in the moment and buy the products. I'm always tempted to, because they do seem to work quite well, but the products are quite expensive. Our masseuses were quite aggressive this time around, but I stood my ground, and we were able to leave without making a purchase. Thanks but no thanks!

We grabbed breakfast at the Lido Deck. This was the only time we had a real breakfast on the ship. There was a good variety of breakfast foods - french toast, pastries, eggs, sausages, bacon, toast, cereal and yogurt. We took our breakfast back to our room to eat. The massage had tired us out, so we decided to take a quick nap at 1 pm. Terrible idea! When we woke up, it was almost 3 pm. We'd slept for two hours! Lunch service was over already.

There was only one restaurant opened at 3 pm - Guy's Burgers Joint, so we headed up to grab a burger. No lines! It was not bad... but I wish we had other options. We walked outside to the deck, but all the chairs were taken at that hour. Up higher on Deck 11, it was very windy and chilly, so we headed back indoors to walk around the ship.

It was formal night, also known as lobster night! The tablecloths were back in the dining room. I love soup, so I order soup every night. I had the mushroom soup, and the chicken noodle soup, while the boyfriend had some kind of duck confit pastry, and oyster fritters (not pictured, he ate too fast) to start. We both had lobsters for our main entree. For dessert, I had a chocolate mousse dessert, and he had the creme brûlée.

During our dinner throughout the week, we were serenaded by one of the staff members. We never got his name (he wasn't the maitre d', but he was a member of senior staff because he was in a suit). He had a great voice, and he often sang old love songs. Many couples slow-danced as he sang during dinner. Afterwards, the waiting staff sang and danced for us as well. Every night was a show in the dining room. We had a great time!

We caught part of the performance by Playlist Productions after our late dinner. (Apologies for the poor quality of these photos, they were taken from my iPhone.) On formal night, the show was inspired by Studio 54, the NYC nightlife in the 70's and the funky fashion of "Soul Train." 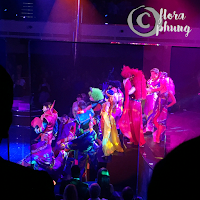 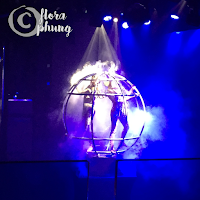 The cast was very energetic and interactive with the audience. Their costumes were eye-catching, and the choreography was well-arranged. If you get a chance, be sure to catch at least one performance. Personally, it was difficult for us because of our late seating dinner time at 8:15 pm. The early show at 7:30 pm would cause us to be late for dinner, so we always left early; and because we finished dinner between 9:45 - 10 pm, we would miss the beginning of the 9:30 pm showing. We never did watch a show from beginning to end.

We weren't quite ready to turn in yet, so we caught the last two comedy shows of the night. It was the last night for the two comedians (Tom Foss and J.R. McCollum) from the night before. During the break between shows, we watched Essencia (the violinist trio) play in the Atrium. I decided to crash after the last comedy show, and the boyfriend headed to the casino. We'd be in Valletta, Malta the next day (for my birthday!) and we had a 10 hour excursion, so I was ready to get some rest.

That concludes our one sea day on the Carnival Vista. Next up: Malta!

Do you have any questions for me? Feel free to ask in the Comments section below!