Vista Vacation: A Taste of Turkey

Once upon a time in Kusadasi, Turkey, we found a convenience store by the port and decided to check it out. As we walked in, several crew members were heading out to pay for their snacks. Two of them were carrying a stack of dark pink packages. I wanted to know what they were. In the snack aisle, we found dark pink packages of raspberry tartinis. I’m a sucker for sweet snacks, so we decided to buy two packages to see what the fuss was all about. Best decision ever. They’re the best snacks I’ve ever had. Since then, I’ve been waiting to return to Turkey to buy more tartinis.


Our first port of call was the sunny and hot, but windy resort port of Kusadasi. We were in no hurry to get on land, so we grabbed lunch on the Lido Deck first. Our first stop was the convenience store. Unfortunately, the tartinis were not at the store. I swallowed my disappointment, it was okay. We headed down the street to do a little shopping for some souvenirs and Turkish delight. 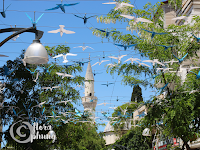 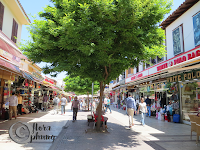 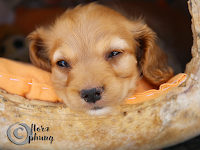 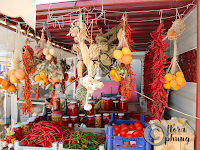 Outside the fish market, an older gentleman was sitting at his produce stand, with a small, adorable puppy sleeping in a gourd labelled "VOTKA" - we later found out that it did indeed translate to vodka. Stray cats roamed the area freely. As we explored the area, we found a small grocery store. The boyfriend likes checking out the deli, so while he did that, I hurried to the snack aisle. There they were. My tartinis! They even had new packaging! Unable to hide my excitement, we grabbed ten packages (yes, ten!) for the road. 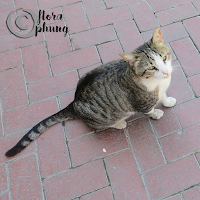 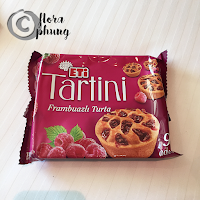 Probably not the best idea for that to be our first purchase, as we spent the rest of the day holding the tartinis. We walked around more shops, but nothing else interested us. Most of the merchants in Kusadasi either sold fake brand name bags, clothes and shoes, or leather jackets. We headed towards the ship, and found a nice path along the sea. It was very windy, but it gave us a beautiful view of the ship, and the other side of the shoreline of Kusadasi, where the resorts were. 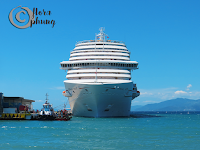 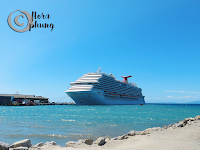 There were tourist binoculars along the path, and we had some liras to get rid of, so what the heck! We decided to take a closer look. Across the bay was resort town indeed, with beaches along the coast. Liras well spent. It was about time to make our way back to the ship. On our way, we stopped for a cappuccino. There was also a Starbucks at the port, but when in Europe... We love their cappuccinos, and we very much prefer it over Starbucks. Most, if not all, cafes in Europe offer complimentary wifi when you make a purchase. We did purchase an internet package on the Vista, but we found that it had been quite spotty, so whenever we had the chance, we would purchase a cappuccino and enjoy some wifi off the ship. Nothing like sitting by the sea in Turkey, enjoying a cappuccino without a care in the world!

It was good timing. All aboard time was at 6 PM - so once we were on board, we grabbed a pizza to share at Pizzeria del Capitano (which is opened 24 hours, and yes, we needed an appetizer before our appetizer!) and we got ready for dinner, which was the late seating at 8:15 PM. Dinner was a doozy (I honestly cannot remember what we ate but it was much better than the first night). We only got a few pictures, as seen here:

We returned to our cabin to change, and found a towel animal, the good dinosaur, made by our stateroom attendant. We found that our turn-down service was often done before dinner, which we didn't mind. Less work for the guy, I guess! He would clean it after we left in the morning, and come back to turn down a completely clean room. On the program for us that night was the comedy club. J.R Mccollom, and Tom Foss were the comedians of the night. We enjoyed both their shows. We were lucky enough to have six different comedians throughout the cruise. And yes, we did have a favourite - but more on that later!

I hope you enjoyed reading about our relaxed "on-your-own" day at the port day in Kusadasi. If you're ever in Turkey, I highly recommend visiting Ephesus. It's a beautiful piece of history, and it is one of the most well preserved archaeological sites. It can definitely get crowded and hot as most sites do, but it is not to be missed. Another amazing adventure is the House of the Virgin Mary, which is believed to have been the last home of Mary. We were lucky enough to have visited both during a previous cruise, and though it was tempting, once was enough. If you're interested, you can read about our visit to Ephesus here. Unfortunately, for brevity, I left out our stop at the House of the Virgin Mary.

Our next port of call is Rhodes, Greece. It was another "on-your-own" day for us, but after that, it's all Carnival excursions! I am going to try to update every three days, so stay tuned!