With its breathtaking coastlines and scenic villages, Rhodes is distinctively Greece. The quiet harbour, surrounded by stunning beaches, is right outside Old Town.

We set off in the early afternoon to explore Old Town. It was yet, another windy day, but hot when we were behind the walls of Old Town. There are many gates to enter Old Town through, and inside the walls is a maze of shops and restaurants. It was definitely easy to get lost. In the distance of the second image, you can see the Mosque of Suleiman, the first mosque of Rhodes. We continued to walk along the path until we reached the town walls. Along the walls were lookouts into the ocean. 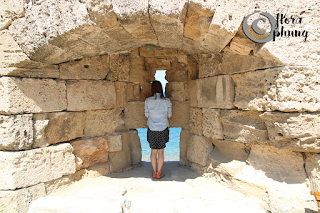 I wish we had done more research before this port. We missed the Palace of the Grand Master, which is a medieval castle with Gothic architecture. We had also walked past the Streets of the Knights, but did not walk down the road either.

Here are the ruins of the Church of Sainte Marie du Bourg. The Romanic Basilica was hit during World War II, and the only thing left standing were the three apses of the the sanctuary. 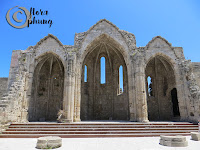 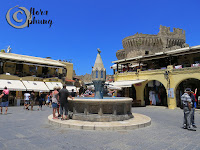 Did I mention how difficult it was to walk on the roads in Old Town? Many streets were covered in pebbles! It was very slippery. Cobblestone in Rome is a piece of cake compared to the pebbled paths in Rhodes. Definitely something to remember if you are planning on visiting Old Town. As we made our way back to the ship, we walked along a long breakwater, lined by three old windmills, and Fort St. Nicholas.

The path gave us a beautiful view of the Vista. It was a lovely waterfront stroll, but we never made it to the end of the breakwater. It seemed the Fort was closed, as many passengers walk to the end, and turned right around, so we decided not to head down there.

If you're planning for a relaxing day, Rhodes is perfect for exploring on your own. We knew we had a heavy itinerary after our sea day, so we decided to take it slow at the start of the cruise. Alternatively, Rhodes is also a gateway to Lindos, a picturesque, modern village with one of the best-preserved Acropolis in Europe. Lindos is about an hour drive away from the harbour, and our Cruise Director, Matt, had raved about it. If we ever have the opportunity to revisit Rhodes, we'll visit Lindos. But I'm very glad we had the chance to explore on our own this time around as not many ports in Europe offers the opportunity to do so.

Dinnertime! I had the soup of the day, the seafood penne pasta and the passion fruit cheesecake. The boyfriend had escargots, steak with mac 'n' cheese (which is delicious, by the way) and popcorn creme dessert. No complaints here! I very much enjoyed my meal, especially the soup, and the sweet chilli compote with my dessert.

After dinner, we headed to the casino to try our luck. I'm not a big gambler (the boyfriend is though!), but I'm a sucker for the quarter machine. Well, Lady Luck was on my side! After roughly $50 on the machine (which really translates in about 25 minutes), we ended up with three chips! The casino ran out of t-shirts (disappointing since it was only day 3), so I got a drink instead, a Miami Vice. 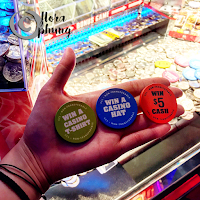 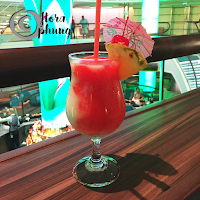 With the complimentary drink in my hand, I headed towards the Atrium. A small crowd had already formed to listen to the trio of extremely talented violinists from Spain. Known as Essencia, they play a range of music from classical to top 40s. The trio usually played for about an hour. I really enjoyed listening to them (and watching them!) play during the cruise. It was also the first time I'd seen an electronic violin. 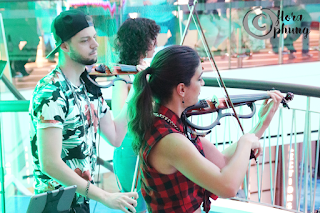 Our next day will be a sea day. It was a short day for us, so I should have the post up during the weekend! Hope you enjoyed this post about Rhodes. Stay tuned!