Pre-Cruise: Adventures in Athens (Part I)

There is always a bittersweet sadness that overcomes me when I finally realize that my vacation is over. But what better way to relive the memories than to write a full trip report? After almost a week of jet lag, we're finally starting to get back into routine. Perfect timing for me to start my trip report this weekend...

After a quick taste of Europe in 2014, we decided immediately we wanted to go back. We'd been looking at Royal Caribbean cruises for a while, before the Carnival Vista came our way and offered inexpensive cruises to Europe in mid 2016. Royal Caribbean has become our favourite cruise line but it was a new ship and cheap prices, how could we say no? So 15 months out, we jumped the gun and booked the third sailing of the Carnival Vista to the Mediterranean. It took forever for embarkation day to come, with two new jobs and a new home in between. But the day finally came (and went, sadly), and I have to say, this was one of the best trips of my life. My experiences were all so culturally rich, and I had such an amazing time (and delicious food) overseas.

Let's jump right in, starting with our pre-cruise stay in Athens and the ports - my favourite part of cruising - then our post-cruise stay in Barcelona. I'll get into the fun ship during Embarkation Day.

We'd decided to spend three days in Athens before our cruise. We arrived in Athens on Saturday morning. We were greeted by our courteous driver, Alex, from from George's Taxi. George's Taxi was recommended by a fellow cruiser, and it was the best decision we made. During our drive to the hotel, Alex gave us a tour of Athens. He was such a welcoming fellow - and so easy to talk to, we decided to book our transfer to the port with him as well.

Day 1 was a write off. We arrived at our hotel, Divani Palace Acropolis, early, and waited for our room. When we were finally checked into our hotel, we took a short nap before heading out for dinner. We ate at God's Restaurant for our first Greek meal. The food was similar to something we can get at home, but we were tired and it did the trick. The restaurant had a fun plaque on the wall about the Ten Rules of Drinking (bottom right). We had a laugh reading it. 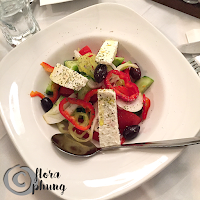 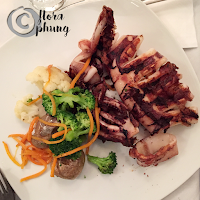 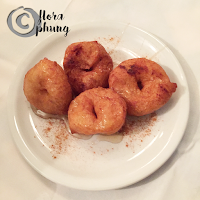 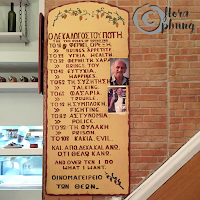 The next morning, we woke up early to explore. It was a windy, overcast day so we definitely needed a jacket for the cool weather. Our hotel was a super convenient ten minute walk from the Acropolis. Note: If you do purchase your tickets at the door, there is a quite a queue - we waited for twenty minutes. There were two different options, we could purchase tickets for the Acropolis and the Theatre of Dionysus (€20) or tickets for all eight of the archaeological sites in Athens (€30). We didn't think we would have enough time (or energy) to see all the sites, so we opted for the Acropolis tickets. 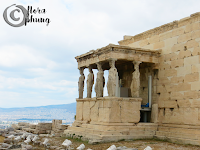 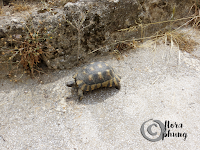 The Parthenon is amazing in person. It is as breathtaking as I had imagined. The sun had finally come out, so the blue skies were the perfect backdrop for the temple. Because the citadel is on a hill, you get a gorgeous view of Athens from the Acropolis. From here, you can see the entire city and Lykavittos Hill (another hill, reached by funicular railway, which had a chapel, a restaurant and an open-air amphitheatre on the top) in the distance. Another amazing view was the statues of the Caryatids on the Erechtheion, once again, overlooking Athens. On the way down from the temple to the theatre, we met a four legged friend.

After one last walk around the Theatre of Dionysus, a major theatre dedicated to the god of plays and wine, we left the Acropolis. Athens is a very walkable city, just like Rome. In minutes, we'd walked over to the Temple of the Olympian Zeus. Since we didn't purchase the tickets, we took a peek of the majestic columns from outside the gates. Just outside the temple was another monument, the Arch of Hadrian, a gateway which was built for the emperor. You can see the sun peeking in and out of the clouds in our pictures. Without the sun, it was definitely chilly in Athens.

From there, we headed to the Plaka, an old historical neighbour in Athens. The area is a labyrinth of stores and homes, which we explored the neighbourhood until it was time for dinner. For our second dinner in Athens, we did a little bit more research and decided to eat at a Trip Advisor recommended restaurant, Liondo Traditional Greek Restaurant. We ordered roast lamb and grilled octopus. We were happy to report the food was much better than the first night's. Opa! 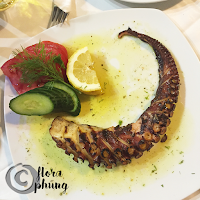 That's it for Part I of our Athens stay! Read Part II here!
Posted by Flora at 22:22