Our stop in Malta coincided with my birthday, so naturally, I got to pick the excursion. I wanted to see as much as Malta as I could in one day. The one place on my "must-see" list was the Blue Grotto, and that narrowed it down to Top 10 Best of Malta. This long 7.5 hour Carnival tour costed us $100 per person, and it did not include lunch. (The other option was the shorter Hagar Qim, Blue Grotto and Marsaxlokk excursion, which I wish I had chosen in hindsight.)

We had a slightly rough start in the morning. Room service did not take our order sheet, so we did not have breakfast that morning. We had thought they were just late, so we waited and waited - until about 15 minutes before our excursion meeting time, when I had this feeling they weren't coming at all. I opened our door to see if our order sheet had been taken. There it was, sitting on our door handle. I was furious, but seeing that it was my birthday, I didn't feel like starting my day with an angry complaint. The boyfriend called Room Service, but they said it would take half an hour to bring us breakfast - which was a couple of croissants and other baked goods. They were pretty unapologetic about the whole ordeal. I had no time for that, so we just ate our tartinis from Turkey. Thank God for the tartinis.

We had a lovely tour guide in Malta. She was a single mother, who worked as a tour guide during the weekends. I can't remember her name, but it was similar to mine, I think it was Florentine, or Florentia? She spoke great English, and even cracked a few jokes. There is a lot of history in Malta. She told us just enough about Malta's history, and allowed us to ask questions.

We were taken by motor coach from the port into the city. Our coach dropped us off by the entrance to the city of Valletta. Our first stop was the Upper Barrakka Gardens, a public garden (with wifi). Here, we were given ten minutes to use the washrooms, and walk around the garden. 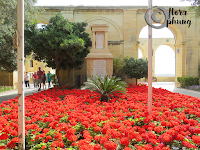 The terrace at the Gardens offered an amazing panoramic view of the Grand Harbour and the Three Cities.

From the Gardens, we walked back to the city of Valletta for a short walking tour. Behind the walls, it was hot. The main highlight was our walk was St. John's Co-Cathedral. We didn't know we had to line up to enter the cathedral, but we did. The queue took about twenty minutes. The boyfriend stayed in line with the tour group as I wandered around looking at the souvenir shops. When we got to the entrance, I was offered a shawl to cover my shoulders and knees (I had my own, so I didn't use theirs). The interior of the cathedral was extremely ornate. The gold carvings on the arches are amazing - you would not expect it from the outside.

The busy streets of Valletta...

The image above on the right is the Auberge de Castille. Its original purpose was to accommodate the knights of St. John. It is now the office of the Prime Minister of Malta. I wasn't sure what an auberge was, I had to look it up. It's actually French for inn or sometimes, restaurant, so I'm thinking it was a bed and breakfast. I wish we could see the inside of the building, as it is known as the "finest building in Malta." I also noticed there were a lot of cannons around Valletta.

We got back on our motor coach and headed to Vittoriosa (left) for a quick photo op. I learned something during this excursion: I'm not a huge fan of short stops. They're just too rushed, and I don't know what I'm looking at. But really, what was I expecting with such a packed tour! We boarded the motor coach, and headed to Marsaxlokk (right), a traditional fishing village. Unfortunately, this became a washroom stop for the women on the tour. I didn't have a chance to walk around the marketplace, but I snapped a few pictures of the harbour. In Marsaxlokk, they have brightly painted traditional fishing boats, that look like gondolas, called luzzus.

Our next stop was the Blue Grotto. The Blue Grotto is actually a number of sea caverns. The water is crystal blue, and at the right times of the day (from sunrise to 1 pm - according to the time stamp on our pictures, we were there just before 1), you can see gorgeous light reflections in the water and white frothy waves splashing against the walls of the cave.

After our short twenty minute stop at the Blue Grotto, we all hopped back onto the motor coach. We drove through Buskett, the only woodland area in Malta, which was planted by the Knights of St. John. We arrived in Rabat for our quick snack. By this time, it was 2 pm, and we were starving! I was ready to eat my own arm. We went to a kazin (a band club or bar), where we were served sandwiches, and drinks. Maltese bread is really hard. I'm not sure if it is supposed to be, but I had a really hard time eating my sandwich. The boyfriend didn't even get past two bites. We also tried Maltese soda. We had seen Kinnie everywhere, so we decided to try it out. The bottle said "bitter orange soda," and bitter it was. Needless to say, snack time wasn't very enjoyable for us. We also had some free time so we walked around the area when we were finished. It was a weird feeling. It was siesta time so the streets were completely empty. It was a ghost town.

When everyone was finished their snack, we followed our tour guide to our last attraction of the day, Mdina. Mdina is a fortified medieval city with high defensive walls and narrow, cobbled street. Without a map, it would be easy to get lost in its maze. It was also very hot inside the walls. In Bastion Square, a parapet above the walls gave a breathtaking view of the island of Malta.

However, I have to admit I was a little disappointed with Mdina. There wasn't much to see or do. There were only a few cathedrals (which required entrance fees), a few museums, and a medieval show of the Knights of St. John. We didn't quite have enough time to sit down and eat, and there were no cafes or quick service restaurants. We were only able to buy an ice cream cone. Maybe we were just too tired, hot and hungry, but either way, we were completely out of energy. So we left the city, and went to our meeting spot for the motor coach, twenty minutes early. Funnily enough, almost everyone from our tour group was already there waiting.


When we got back to the ship, it was past 4 pm. Our first priority was to find food. We didn't feel like having Guy's Burgers, so we waited for Bonsai Sushi to open at 5 pm. We shared a wagyu short ribs appetizer with a spicy tuna roll, and we each had a bowl of miso soup. It hit the spot for us! As you may know, we're from the West Coast (in Canada), where we have some pretty amazing Japanese chefs, and plenty of fresh fish,  so we're a little bit snobby with our sushi. Let me tell you, this sushi was good and I don't even think the chef was Japanese!

Dinner was great. I had my soup (minestrone) as usual and a beet salad, while the boyfriend had proscuitto and another appetizer (sorry, we can't remember what it was). I enjoyed basa fillet of my main course, while the boyfriend had fried chicken. Then, I had a birthday cake! I'm not even gonna try to be surprised about this, I knew it was ordered. It was delicious, moist chocolate cake, which I've had it before on the Lido Deck, but I loved it. We still ordered dessert, and we both had bread pudding. I was a happy girl.

As for onboard entertainment... The Vista also welcomed two new comedians in Malta, Tony Vino and Anthony Scott. We loved Anthony Scott, he was hilarious. He was a Scottish man, but he talked a lot about home, Tenerife, and that planted a seed in our head for our next cruise adventure.

Now as for why I wished I had chosen the shorter, but more concentrated Blue Grotto excursion... we were glad we were able to see so much of Malta in a day, but truly, the quick stops for photos took away the feeling of being in Malta. We didn't get to soak in what we were looking at, and we didn't have a lot of chances to eat (I'm sure by now, you can tell that we love food). I think a shorter, less packed tour would have given us a better experience of what we wanted to see. It would have also allowed us to either have breakfast before the excursion, or time to find a place to eat in Malta, or return to the ship and eat.

Well, that concludes day five on and off the Carnival Vista. I hope you enjoyed reading about Malta! Up next is Messina (Sicily), Italy.
Posted by Flora at 16:15