A Visit to Vietnam: Turf I

I'm splitting up our time on land because we technically spent two days on land in Vietnam; and we did a lot of stuff in those two short days. The first day was our last outing with our group. The husband and I were staying an extra day on our own.

We were driven into the city bright and early and dropped off at a street restaurant for breakfast. The restaurant only served one item, banh cuon. Banh cuon(s) are rice noodle rolls with a pork and woodear mushroom filling. My mom always made it as an after school snack for me when I was in grade school. The banh cuon was serve with Vietnamese ham. I didn't eat any of the veggies in fear I would get sick, but the banh cuon was delicious!

First thing in order, Ben Thanh Market (above right). This well-known marketplace was much talked about amongst our group during the week, so we were all very excited to finally see one of Saigon's oldest marketplace for ourselves - the sweat, the un-foodsafe meal preparations, the tourist traps, we were ready for it!


Let me tell ya - they were not kidding when they said it would be hot and stuffy inside the Ben Thanh Market. That was an understatement. You are literally cooking in that oven of a market. There is no breeze, and the air is stale. Mind you, it still smelled of nuoc mam (fish sauce) and sweet fruits. It didn't stink, but it had to be one of the most uncomfortable environments I'd ever been in. But let's get to the good stuff, shall we? 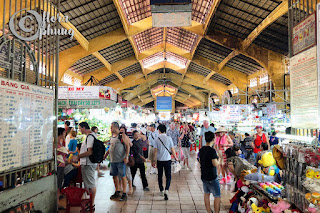 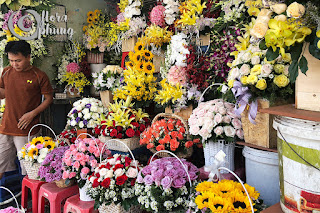 There were a ton of fruit stands with fresh or dried exotic fruits and flower stands with beautiful arrangements that were made fresh daily. The shopping here was all a tourist trap. Everything that had a brand name on it was fake, some were pretty cheap, but some items, like Nike and Fjallraven, were so ridiculously priced you might as well just buy the real thing. They had a lot of souvenirs and specialty items too, but those were overprices compared to the Mekong markets. I was kicking myself for not buying a conical hat! My goal was to buy one thing: an ao dai! (Well actually two, because technically we were in search of an extra hand carry luggage but we weren't willing to spend more than $20 Canadian for one!)

An ao dai is a tradicional fitted silk tunic worn by mostly Vietnamese women. It falls at your knees or sometimes your ankles depending on the style, but it has slits all the way up to the waist, and is worn over trousers.

It was a lot harder than I thought it would be to buy an ao dai. A lot of them were tacky with lots of neon colours and strange patterns. Another option was to get one custom made, but that cost nearly $200 Canadian for the whole outfit. After looking at multiple stands and getting separated from our group, I managed to find a white one with cherry blossoms on it. I paid a higher price for it because I bought it from a government regulated stand with fixed prices. It was pretty sheer as it was white but it was the nicest one I saw and I was happy with my purchase.

After finding our group again, we decided to split up for lunch because everyone wanted to eat something different. The husband and I went to the banh beo hue stand. Banh beo are little rice cakes with mashed mung bean and dried shrimp served with nuoc mam. This was also another snack my mom prepared as an after-school snack when I was young, but here in Vietnam, they also had little tapioca dumplings in the dish. I loved the tapioca dumplings, and they were the one thing my mom didn't make at home. The food was prepared in front of us and we ate it on low plastic stools at the counter. It was one of the most delicious meals I had in Vietnam!

After lunch, it was time for us to part with our group. We said our goodbyes and were dropped off at our hotel while they headed to the airport. We were staying at the Intercontinental Saigon, a much nicer hotel than we were used to. We freshened up and went back out again. We had a few places to visit on our to-do list and the husband was on the hunt for a suit tailor. Our first stop in our own was the Saigon Notre-Dame Cathedral and the post office, which were both a convenient block away from the hotel and across the street from each other!

Saigon Notre-Dame Cathedral is another well known symbol of the old city. The French-inspired cathedral has two bell towers just like the Notre Dame de Paris. However, it only has six bells unlike the ten in Paris. During our visit, it was under construction - and it was closed to visitors due to a private celebration of life. In front of the cathedral is a Virgin Mary statue. In 2005, it was reported to have shed a tear, causing thousands of people to flock to the statue.

Across the street is the Saigon Central Post Office. The building is remnant of French colonial times. Inside is a fully functioning post office, and a few souvenir vendors. It reminded me of a train station, with its high ceilings. 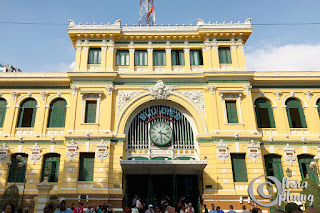 The husband had done a lot of research prior to our trip, and was set on getting a suit made at Tuyen Fashion Tailor. We walked-in with no appointment, but Mr. Tuyen gladly took his measurements and promised the husband a suit in 48 hours. Unfortunately, he wasn't able to complete a dress for me. We found another tailor, Sang Trong Lua or Elegant Silk, who promised to complete two dresses in 48 hours.

It was a funny thing - everywhere we walked, we ended up at the Ben Thanh Market. It was the centre of the city. That evening, we wandered around the area, and got a massage. Be careful when you are lured off the streets into a massage parlour! The discounted prices that they show you before you go in are not what you end up paying. They gang up on you, and tell you a sob story to try to force you into giving them a big tip. We also came across a few new shopping malls, Vincom Center, Diamond Plaza and Parkson Plaza. Ho Chi Minh City was very fashion forward, so I loved window shopping at all the little boutique shops and larger department stores.

We grabbed pho at the end of the night before turning into our swanky hotel for a good night's sleep. Tomorrow, we will be exploring for a full day! Stay tuned...
Posted by Flora at 20:35