A Visit to Vietnam: Surf

This entry is called surf because we spent a lot of time on the water.

Our next field trip was a day tour in the Mekong Delta. This was a must-do on my list for Vietnam. Thankfully, we were doing it as a group as opposed to just to two of us. As a group, we had a translator, which was so helpful. I may look Vietnamese (and I may have a Vietnamese last name), but I don't speak or understand the language!

We started the day off with a bowl of pho in downtown Saigon, and then we were shuttled off to My Tho. My Tho, which is located in the Mekong Delta region, was a three hour drive south of Ho Chi Minh City (in a lot of traffic). The Mekong Delta is a maze of rivers, swamps and islands, which you travel through by boat. On the river, there are floating villages and markets.

To start our tour, we took a long-tail boat from the port to the first of four island, Unicorn Island. There, we stopped for kumquat honey tea and a sample of the tropical fruits grown in Vietnam. Durian is a must-try in Vietnam. It's a very fragrant, unique tasting, sweet and creamy fruit. Durian was one of my favourite fruits while I was growing up (in Canada), but unfortunately, I've developed an allergy to it. Jackfruit is another plentiful fruit in Vietnam. It has a slightly subtle sweet, milky flavour. We saw so many jackfruit trees during our walk through the island. During our tea time, a group of Vietnamese women also sang "If You're Happy and You Know It" in Vietnamese and English to us. 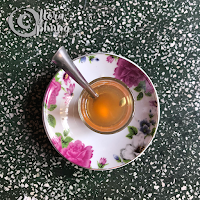 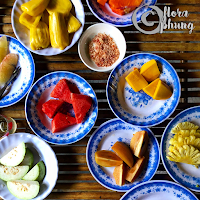 Soon after, we headed towards the dock for a journey into the river. We got into a rowing boat with two rowers and set off into the busy canals. It's amazing how smoothly traffic flows on the river. Everyone moved at the same pace (I guess no one is in a hurry to get anywhere), they knew their safety zones, and everyone was respectful of one another.

Even though there was an abundance of greenery, there was no shade and it was very muggy. I came prepared with my fedora hat, but everyone else was loaned a conical hat.

It wasn't a very long voyage - it only felt long because of how slow the boats moved, but it was a very smooth and enjoyable voyage. Soon, we were at another dock, and what do you know! Our long-tail boat and tour guide was already there waiting for us. We got back into the boat and sailed to Turtle Island, where we were shown how coconut candy's made. We got to sample a few different flavours of candy. While I had heard that they try really hard to force or guilt you into buying the candy, our tour guide and the workers did not pressure us at all. 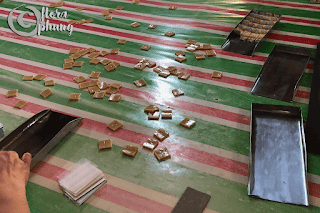 We were then led down a dirt path for a horse pulled carriage to our lunch destination. They had a very small, young adult horse pulling the six of us. We were wary but she did it!

It was an interesting restaurant experience. There was a little zoo with a crocodile pen, caged pythons, chickens and porcupines in the same compound. The restaurant, Viet Nhat, had open air seating under a pavilion by the river. Our tour guide ordered a bunch of local dishes for us. We had fried elephant ear fish, salad rolls, stir-fried morning glory, and fried rice.

After lunch, we walked around the zoo area. They had a lot of tourist activities. You could buy a fish and feed it to a crocodile on a fishing pole, or buy a bucket of small fish to feed bigger fish.

Soon after, our tour guide was back and we were in another boat heading towards another island. Phoenix island was next. Phoenix island was probably the most lush and charming out of the all the islands we visited. Lots of greenery surrounding colourfully painted dragon pillars.

A note worth mentioning... We saw a lot of caged roosters on the other two islands, but on Phoenix, we saw a lot of advertisements for cockfights, which took place earlier in the day. We were also shown a large arena used for cockfights. It is a cruel reality, but this is real life in Vietnam. Cockfighting is a legal traditional sport in Vietnam. It is only illegal to bet on the sport.

Phoenix island was pretty much deserted by the time we were touring it. Perhaps most of the tourists passed through in the morning during the cockfights. We passed a narrow bridge made of two bamboo poles known as Monkey Bridge (bottom left). I didn't dare walk across it, but some of us did. We toured the thatched museum dedicated to the Coconut Monk, and viewed the Hoa Binh Tower. We also walked along a couple rows of souvenir shops before arriving at the other end of the island, where our original long-tail boat was waiting for us.

I'm not sure why we didn't visit Dragon island, but by the time we were leaving Phoenix island, it was late in the afternoon and we were all so very exhausted. On the way back to the mainland, we enjoyed a young coconut. 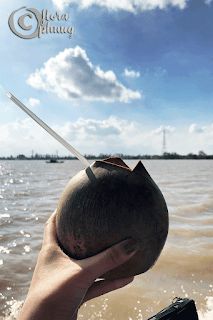 It took a little less than three hours to get back into the city, and most of us fell asleep during the ride.

Our group headed to Caravelle Saigon for dinner. We were severely underdressed for the five-star hotel restaurant, but a reservation had been made earlier in the day, and it couldn't be cancelled. Luckily, Ho Chi Minh City was full of tourists, so we managed to blend in. There was a wide range of food from sushi to wonton soup to salads. There was also a seafood buffet which featured a raw bar. You're able to choose your own seafood, and how you want it cooked. There were many different types of desserts, including a chocolate fountain. Our meal was delicious!

We hit the road right after dinner. We had a 1.5 hour drive back to where we were staying, and we had a loooong day. Coming up, we'll be on land! Any guesses what that entry will be called? Stay tuned for more fun in Vietnam!
Posted by Flora at 22:15