A Visit to Vietnam: Turf II

I've split up our time on land into two parts; the second day was our last day in Ho Chi Minh City.


We slept in a little on our last day in Ho Chi Minh City.

The husband and I didn't have a day plan because we had seen most of the tourist attractions, but we did have plans for dinner and a massage after the meal.

To start the day, we grabbed an iced coffee from Highlands before venturing into town. It was a muggy day, so we decided to walk away from the city centre and towards the the water. Nguyen Hue Street is a popular walking street which begins at City Hall. The street starts across from City Hall, where the statue of President Ho Chi Minh is. It's a very wide street with an extra walkway in between two lanes of traffic. There are a lot of restaurants and small shops along the walking street. We asked past an ao dai exhibit, but didn't go inside. I had read online that it was a very small exhibit and wasn't worth the admission price. 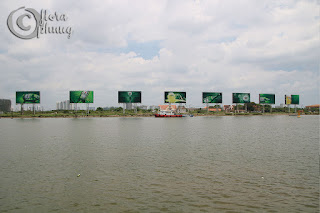 After dangerously running across eight lanes of Vietnam traffic, we got to the pier. We walked along the river and admired the skyline. It was very hot even with no sun and lots of clouds. While the river looked beautiful from afar, sadly, it was very polluted and littered with garbage below where we stood. We also came across a ferry crossing at the Saigon River. We weren't quite sure where it would take us, so we decided to find lunch. We had lunch at a proper restaurant called Hoang Yen. When it's scorching hot and you're hungry, tired and sweaty - you just want to eat anywhere. But in Vietnam, you don't want to just eat anywhere. So we went into the first restaurant we saw with reviews. If it had reviews, it's legit. Unfortunately, Hoang Yen was not very authentic and cost over five times the price of street food. We also noticed the area was a lot quieter than where the Ben Thanh Market was situated. Less cars, less people but lots of high rises and hotels. 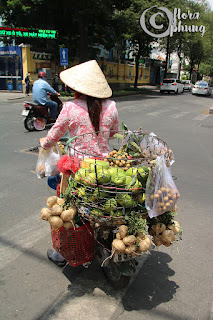 After lunch, we went back for fittings at both of our tailors multiple times as it was very easy to get around in the area. We also noticed a lot of produce bikers on the streets. We watched in awe as they biked past us with their big baskets of fruits and vegetables in the heat. While we were in and out of the tailors, we walked around Ben Thanh Market and Saigon Centre. We had some time to kill before dinner as most õc eateries open around 5:30 pm.

The husband had really wanted to experience this national pastime in Vietnam. An õc or snail eating, is a popular activity in Vietnam. It's not just about eating, it's also about drinking and socializing with friends, family or colleagues - it's a culture.

Snails are plentiful in Vietnam; and they come in all shapes, sizes and colours. But it's not just snails on the menu, almost anything with a shell is served, including clams, mussels, scallops and oysters. Most of these snail eateries are off the beaten path in hard to find places, a "hole in the wall" if you want to call it that.

The snail eatery we went to was in a maze of small one-way alleys. Õc Dao 1 was under a tent in a dirty alley. I definitely felt dreadful when we first arrived. The owner and the servers didn't speak much English and they motioned to an empty, uncleaned table in the middle of the seating area. There was a dirty bucket for your shells underneath the table. When we sat down, we weren't acknowledged for a long time. I sat at the edge of my stool and held on to my purse for dear life. There's no menu because everyone knew the menu by heart. We asked for a menu, and they had to search for one.

It turned out to be one of the best meals of my life. We ate on low steel tables sitting in plastic stools. The lighting was dim, and it was hot and muggy. We ate snails, razor clams and scallops with nuoc mam and a combination of salt, pepper and lime. To finish our meal, we also ordered stir-fried morning glory and Indomie! Pictures don't do the meal justice, we know that. It's not a fancy meal; nor is it a pretty presentation. You have to taste it. Everything was so simple, yet so delicious.

After dinner, we took an Uber to Salon Heritage Spa. This salon had the most positive reviews. We both had a very relaxing one hour Thai massage, and we took an Uber back to our hotel. The traffic in Ho Chi Minh City was insane. We drove by a lot of nightclubs and higher end restaurants. We didn't explore this particular area by foot, but it definitely looked the city's central nightlife scene.

Vietnam treated us so well. We had such an amazing time in Ho Chi Minh City. We learned so much about the culture and experience so many different things. We are in total awe of Vietnam's wonders and we hope to be back soon to visit the north. Vietnam is like a diamond in the rough that captures your eye, draws you in, and compels you to return - because why wouldn't you want to keep digging until you get that diamond?
Posted by Flora at 18:34