Lisbon is a city of both modern culture and unique heritage. It just seems like one of those cities that has sunshine all year round. There's something just so warm and inviting about the city.

We wanted to see as much as Lisbon as we possibly could in 9 hours, so we hopped on a sightseeing bus to take us around Lisbon. We literally got on the first bus operator who approached us, and that was Yellow Bus. We had a few hot spots on our list, and luckily, this bus route took us to all (but one) of them.

We got off the bus at the stop along the Tagus River, where the Belem Tower and the Padrao dos Descobrimentos are located. Both are The Belem Tower is a fortified tower built in the 16th century. It is also a UNESCO World Heritage Site. The Padro dos Descobrimentos monument is located across from the Belem Tower. It was first constructed as a temporary exhibit, but was reconstructed as a permanent structure twenty years later. The monument celebrates the Portuguese Age of Discovery during the 15th and 16th century. Unfortunately, you can't walk over from the Belem Tower to the Padrao dos Descobrimentos monument on the dock. You have to walk around the pier, on the sidewalk along the street. I decided to look around the souvenirs stand while the husband ran over for some pictures.

Our next stop was lunch! We sat down for lunch at the original Pasteis de Belem. They're famous for their Portuguese egg tarts, also known as pastel de natas. The bakery was packed! It's a small shop, but a big operation. The recipe has been a secret since the early 19th century, and it's a huge hit! They sell over 20, 000 tarts every day.

From the bakery, we hopped back onto the Yellow Bus. We got off in the Commerce Square (Price ado Comercio) by the Tagus River, and eventually made our way to the Lisbon Cathedral, or the Se de Lisboa, or the Santa Maria Maior de Lisboa. It was quite a steep walk on cobblestone to the church. The church is the oldest church in the city. 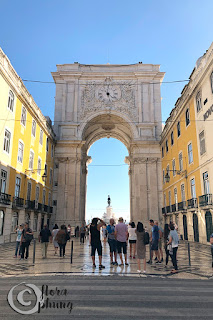 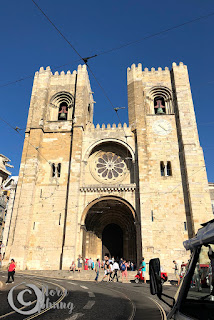 We were a little tired at this point, and luckily, there were a ton of tuk-tuks parked around the church. We decided to take a tuk-tuk tour in the city, and our driver drove us to the highest point of Lisbon, Our Lady of the Hill or Miradouro da Senhora do Monte. The hillside overlooks Lisbon with panoramic views. From this viewpoint, you can also see the Sao Jorge Castle.

Our tub-tuk driver took us back into the city, and dropped us off in downtown. We did some shopping, grabbed some ice cream, ogled at the pastry shops and took an uber back to the ship at sunset.

Lisbon has a lot to offer, but we didn't have enough time. We tried our best to get a taste of it, but it is a big city. We barely dipped our toe into it. With so much distance in between attractions, I definitely wouldn't recommend the sightseeing bus as the bus moves slower and makes many stops (Uber would be the way to go).