Remember when I said we weren't done? Well, this post is way overdue! With new responsibilities at work and wedding planning in full gear, I've had to put blogging on the back burner. May is starting to look a little bit less hectic, so I can finally finish this post which has been sitting in my Drafts folder for the last eight weeks.

Let's take this back to the very beginning, shall we?

One of our very first trips together as a couple (eight years ago) was to Disneyland. I hadn't gone since I was a kid, so I was initially a little reluctant. Eventually, I came around, and needless to say, it was the best decision I made.

If you are wondering... yes, the Disney experience as an adult is just as incredible - especially when you haven't been there in a decade. There is something so magical about the way Disney makes a person feel. It brings out the inner child in all of us, and Hakuna Matata! Disney allows us to cast all our worries aside and be happy, even if it's only for a little while.

Disney is completely life-changing. In no other place on Earth had I felt more happiness, more magic, more joy... or more frustration, more impatience, and more broke in my life. Nope, Disney is not all pixie dust. There's blood, sweat and tears. Disney is not for the weak, and while it is one of the many things that brought my fiancé and I together, it was also something that truly tested our relationship. Nonetheless, Disney hold a special place in our hearts.

The last time we visited Disney World was in 2013. We couldn't fit a trip in during our Oasis of the Seas cruise in 2015. So this time around, we wanted to make sure we got our Disney fix, even if it was only for a few hours.

We disembarked around 9:30 AM. We chose not to walk off the ship with our luggage because it was a little too early for us. We needed our sleep and we didn't want to be too tired, especially since the fiancé would need to drive us to Orlando. Luckily, the timing worked out just fine. We took a taxi to the airport, picked up our rental car and we were on our way. The three hour drive from the port of Miami to Orlando wasn't as bad as we had heard. We did not run into much traffic, although we did take the turnpike to our destination.

We arrived in Orlando around noon and made a quick pitstop at Target for some snacks, toiletries and water. We checked into our hotel to freshen up and pack our bags for Disney World. Because we were only staying for one night, we chose to stay at a moderately priced Best Western rather than a Disney hotel. All hotels on Disney property have park tickets for sale, so we purchased our one day park ticket for Magic Kingdom at the hotel. This enabled us to skip the Ticket Office queue at the park. Unfortunately, we just missed the shuttle to Disney so we had to wait quite a while for the next one. Because we were not at a Disney hotel, the shuttles came less frequently. After switching from the shuttle to the monorail and going through security checks, we were in Magic Kingdom at 3 PM! 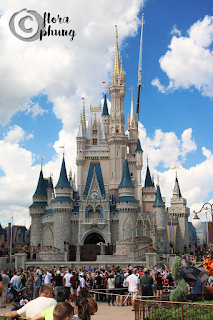 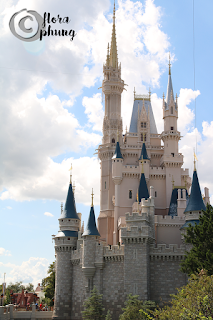 As we reached Cinderella's castle, the Festival of Fantasy Parade began. We had walked right into an area where you cannot leave unless there was a break in the parade, so we decided to stay and enjoy the celebration. 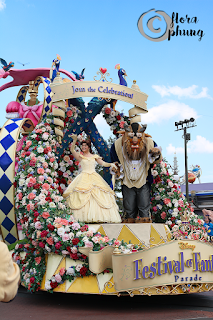 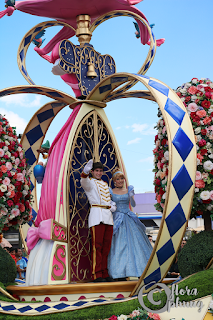 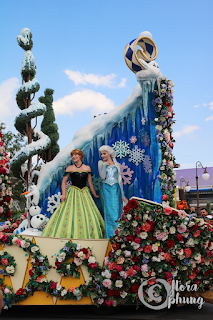 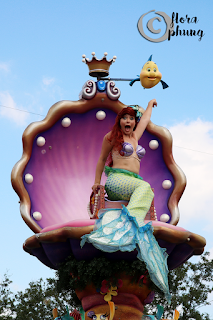 First order of business, the most important reason for our visit... Seven Dwarfs Mine Train! We were quite excited to ride it. It was a 75 minute wait with no FastPass+. We sucked it up and joined the queue. Mine Train is kind of like Big Thunder Mountain Railroad. It was bumpy, exciting and it was fast! We loved it.

Next, we grabbed a quick bite at The Friar's Nook. Their speciality is mac 'n' cheese. It was our first meal since we left our cabin around 8:30, so we were starving. Next up was Splash Mountain. Since it was scorching hot, we needed to cool down. This was one of the few rides we had a FastPass+ for. But even with a FastPass+, we still had to wait a good half hour for the ride. We treated ourselves to a Dole Whip afterwards and watched the Mark Twain Riverboat sail into the sunset.

We actually got a whole lot done in nine hours! We managed to hit up our favourites: Big Thunder Mountain Railroad, Jungle Cruise, Haunted Mansion, Pirates of the Caribbean, Mickey's PhilharMagic, Journey of the Little Mermaid and Buzz Lightyear's Space Ranger Spin. I don't even think we stopped to eat!

We wanted to be close to the castle for the viewing of Wishes so we headed over to the area early. Luckily, we found a good spot about half an hour before the show. Wishes always makes me emotional, no matter how many times I watch it. This show was as magical as the last. Little did I know it was the last time I'd be watching it. (Last week, a new fireworks show, Happily Ever After, replaced it.)

It was a nightmare getting out of the area after Wishes ended. I definitely remember Magic Kingdom being more organized three years ago, but this was by far one of the most suffocating crowds I'd been in. We managed to squeeze into Tomorrowland for Space Mountain and Stitch's Great Escape. After a quick walk through Storybook Circus, we ended up at Peter Pan's Flight for our last ride. As we walked back to Main Street, Disney's Electrical Parade was starting so we stayed behind to watch it.

We left the park well after midnight and caught the last monorail and the last bus back to our hotel. We checked out early the next day to make the drive back to the Miami airport to catch our flight home. We were ahead of schedule, so we even managed to make a quick stop at Sawgrass Mills! (However, in hindsight, it was a bad idea as we just made it to the airport in time for boarding.)

When I first thought about whether a day trip to Disney World was doable, a lot of people told me it would be impossible. And I had thought so too! There were a lot more negatives outweighing the positives. It was going to be a lot of driving. There might be traffic. It was going to be expensive. We would only get a few hours at the park. So throughout the cruise, we went back and forth. Eventually, halfway through the cruise, we decided it was just easier to go shopping at Sawgrass Mills. We even booked a hotel in Sunrise, Florida! But on our last day on the Carnival Glory, we were longing for Disney again, so we decided to make the trek to Magic Kingdom. Let me tell ya, it was well worth it.

As Walt Disney said, "if you can dream it, you can do it." And you know what? Call us crazy but "it's kind of fun to do the impossible."
Posted by Flora at 00:30