Friday, the 13th, was our first full day in Paris. At the time, we were still engaged, and we started off our day with a Flytographer engagement shoot early in the morning. We met our photographer at Trocadero, and took some pictures in front of the Eiffel Tower. Unfortunately with our luck, the sun didn't break through the clouds until after our photoshoot. When we arrived at Trocadero just before 9 am, the crowds were just forming. However, you can see larger crowds in the photo below, that photo was taken just after 10 am. The crowds gather fast in Paris! 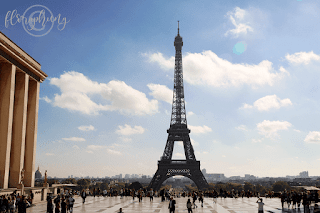 We went back to our Airbnb for a quick change of clothes afterwards, and got on the Hop-On-Hop-Off bus. The HOHO bus in Paris is not a great idea. Traffic moves extremely slow in Paris, especially for busses. At one point, we were stuck by the Louvre for almost 30 minutes. We purchased a two-day pass, which did come in handy, but we only rode it from Notre Dame to the Eiffel Tower on the first day.

The HOHO bus took us to the Arc de Triomphe. We marvelled at the monument from afar, but decided not to climb it. We drove down Champ Elysees, and past Place de la Concorde - but because we had an appointment at the Eiffel Tower. 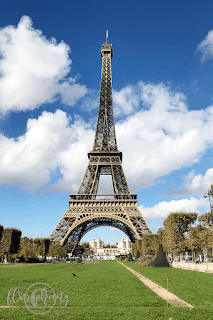 Going up the Eiffel Tower isn't for everyone, but it was something we wanted to do. Unfortunately, upon arriving at the Eiffel Tower, we discovered there was a national strike movement which restricted access to the tower at the time of our visit. Defeated, we walked through Champ de Mars instead, and towards the Wall for Peace. The monument was under construction so we weren't able to get too close. As we continued walking, we reached the bridge and decided it would be a good time to go on a river cruise.

After our river cruise, we walked around the area in search of a search of a small snack (well, specifically French pastries!), before heading back to the Eiffel Tower. We had heard the strike would end around 7 pm, so we made plans to head up the Tower that evening. Our ticket was now invalid, and we had to line up to purchase new tickets. It's definitely not recommended, and buying tickets in advance would certainly save you a lot of time, but we were in an unavoidable situation. 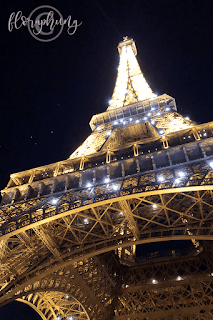 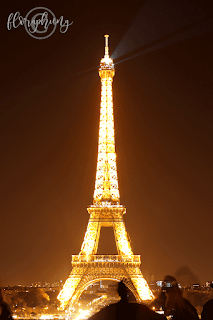 We made our way up the Eiffel Tower, and spent about an hour marvelling in the views and lights of Paris. For us, it was a toss up between going up the Eiffel Tower (280 m), and the Arc de Triomphe (50 m). We decided more height would offer us a more breathtaking view of Paris. I think the turn of events worked towards our favour. Nothing compares to the Eiffel Tower at night. The sparkle is even more magical and impressive up close.

Paris is very walkable. After our visit to the Eiffel Tower, we walked back to Trocadero to watch it sparkle from a distance, and also grab dinner in the area. At the time, it was easier for us to find an Uber to get back to our Airbnb from Trocadero. We dined at an Italian restaurant across from the square.

We got back to our Airbnb around midnight, but the night was still young. Marais is a very atmospheric and lively area for lgbtq-friendly nightlife. The restaurants were busy with live music and chatter, and the bars still had long queues around the block. We had a long day, so we were happy to go home. To cap off our night, we stopped by one of the many gelaterias for dessert. 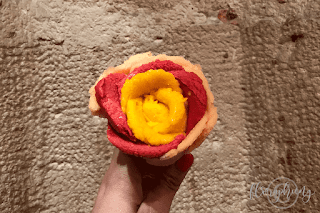 Time passes by quickly in Paris, even when you're moving slowly. We tried to savour every moment. In our daily lives, everything moves around us so quickly. It's nice to be able to sit back, appreciate the little things, and watch the world go by when you're on holiday.
Posted by Flora at 00:08