Tenerife was another "must-visit" on my bucket-list. Yet, it disappointed me too. Maybe we should have booked an excursion, but after many excursions on the other two Grand Canary islands, we thought it'd be best to explore this one on our own.

Tenerife is the largest of the Canary Islands. It is known for its many beaches, its active volcano (Mount Teide), and its many national parks.

We only made it to downtown Tenerife, and shopped among the other cruise passengers, but the atmosphere was jovial and celebratory. Street musicians were everywhere, and there was even a Chinese dragon parade! We made our way through the stores, and decided to find a marketplace. 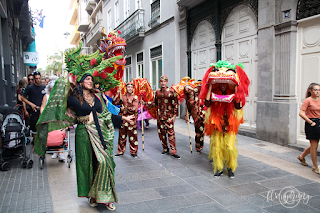 After doing some quick research on free wifi, we made our way to La Recova de Tenerife. We love food markets, but unfortunately this one was closing as we arrived. But there were a lot of stands with fresh fruits and vegetables; there were ice cream stalls, butchers' counters, tea shops, florists, fish counters, and cheese stalls. It's always interesting to see the daily bustle and many locals shopping for their groceries.

We had a short and easy day in Tenerife. We felt recharged and ready for our next port: Madeira, Portugal.
Posted by Flora at 01:16