It's time to take a trip down memory lane and revisit our European cruise from last year. It was hard to write about this trip because we had a family medical emergency on our way home. We ended up staying behind in Montreal for an extra week.

But our wedding festivities have come to an end and everything is back to normal now, so I thought it was a good idea to look back on our trip. The incident may come up later on, and I may or may not choose to address it then. For now, let's focus on our happy moments during our vacation.

To refresh your memory, our trip started in Southampton, England. From there, we set sail on a two week cruise across the Atlantic stopping in Spain, Portugal, and the Canary Islands. We then sailed back through the Bay of Biscayne returning to France, where we disembarked early for three days in the wondrous city of Paris.

We flew into London on a red-eye, and took a car to Southampton. Southampton is about an hour and a half away from London, and it was exactly as I had imagined it... Cold and dreary, much like Vancouver, to my dismay. We stayed at the Holiday Inn directly outside of the port for one night. It was a great location! From our hotel room, we could see the Navigator of the Seas.

The hotel was also about two blocks away from the West Quay Shopping Centre, so we decided to check it out. We took the long way there through Old Town as tourists. We passed by the Titanic Restaurant, a pub that paid tribute to the Titanic as Southampton was the port of its ill-fated maiden voyage. We explored the area around Bargate, which is a medieval gatehouse. Today, it serves as a historic monument for the city of Southampton. 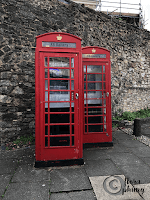 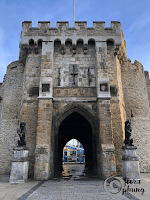 Since it was pretty late when we arrived at West Quay, we decided to have dinner there as well. There are a strip of restaurants outside by the movie theatre, and we wanted something filling so we chose L'Osteria, the Italian restaurant. I recommend sharing a pizza. It's huge! The pasta, on the other hand, was not great. It had gotten very cold and windy by the time we finished dinner, so we rushed back to our hotel.

It was raining the next morning, so we ran to Primark to get myself some water-resistant shoes. I was worried it would rain at the ports and all I had packed were espadrilles, sandals and heels. Luckily, I was able to buy a pair of loafers for £5. Why don't we have Primark in Canada?! When we returned to the hotel, we set out to the cruise terminal. There were two entrances to the cruise terminal, unfortunately, the one closest to our hotel (which was literally a two minute walk) was closed due to a boat show. That meant we had to walk all the way around the port to the other entrance. With six pieces of luggage and unfavourable weather, it made more sense to take a cab instead. It was about £12. Once we were there, security and check-in was a breeze. Because we were Platinum cruisers, we had a large window for check-in - between 11 AM to 3 PM. We were in no hurry and ended up going at 2 PM.

Once onboard, we headed straight to our cabin to put down our carry-on luggage.

Immediately after, we headed up to the Windjammer for a late lunch. Nothing like a hot meal to start your cruise! Afterwards, we attended our muster drill before the sail away. Goodbye Southampton!

We had dinner in the dining room that evening. As it was the first day of the cruise, the menu wasn't very exciting. We did have to put in a request for our own table. Out of our many family cruises, this was the first time our party of four was seated with two other groups. I wasn't full from dinner, so we grabbed a few slices of pizza from the Promenade Cafe. The Promenade Cafe is opened 24 hours, and it serves pizza, sandwiches, sweets and other hot food. It's also the place to grab a hot cup of tea after a show. We found ourselves sneaking in a midnight snack at the cafe nightly throughout the cruise.

Age is finally catching up with me! I was still pretty jet lagged so we turned in early that evening. The next day is our first sea day. Stay tuned...
Posted by Flora at 21:30