We were so excited to see more of Barcelona and we woke up as early as we could the next day. Our first task was to find a hop-on-hop-off bus to take us around the city. Our hotel sold slightly discounted tickets for Barcelona Bus Turistic, so we decided to purchase the tickets directly from them. Barcelona Bus Turistic has three lines, red, blue and green. We were only interested in the red and blue lines, as the green line was a route along the beaches, and we didn't have enough time for it. While this bus stopped running earlier than the other tour bus, we noticed it had more stops, and the stops were closer to the destinations, which is another reason why we chose this bus.

To start our day, we grabbed a baguette from the cafe on the corner and walk to our bus stop, which was four blocks away. The closest stop in to the Best Western in Eixample is La Pedrera on Passeig de Gracia (on the red line). La Pedrera, also known as Casa Mila (below right), is the last civil work of Antonio Gaudi, the famous Spanish architect. The building was initially built for a married couple, but eventually, the widow sold the property, and today, it is a UNESCO World Heritage Site open to the public for viewing. We never got a chance to visit Casa Mila, but it is a very unique and artistic building, one of many Gaudi designed and built himself. The upper level is covered in white tiles, reminiscent of a snowy mountain.

We got on the red line, and stayed on for a few stops. We got off at MNAC, the Museu Nacional d'Art de Catalunya, which offered an incredible view of the city (almost every European city we had visited had an easily accessible site for an amazing panoramic view of the city). MNAC is a museum of visual art and it has the an outstanding collection of Romanesque paintings. General admission is €12 for two days, which is not bad at all. While we didn't have time for the museum this time around, it is definitely on our list for when we return to Barcelona one day. Below the museum is the famous Magic Fountain of Montjuic, which can be seen behind the four pillars in the photo on the right. The fountain is known for its light show during the night.

We hopped back onto the bus to our second stop, Maremagnum at Port Vell. We took a short shopping break at the mall, but came up empty. Almost everything is closed in Barcelona on Sundays but Maremagnum remains open and it stays opened for 365 days of the year. We walked around the waterfront harbour afterwards, and stopped for a snack. While Port Vell is busy, it is filled with illegal street vendors selling fake purses and shoes.

Our third stop was Barri Gotic, the Gothic Quarter, which is known as the old city. Just like Las Ramblas, the Gothic Quarter is a maze. The first attraction we saw in the area was the Barcelona Cathedral. With the entrance fee being €7 per person, we decided against going inside. We wandered around the area, and took pictures of the buildings.

Turns out the Gothic Quarter is connected to Las Ramblas through a few side streets. A few turns here and there, we ended up on Las Ramblas! Since we were there already, and feeling a little hungry,   we decided to head over to La Boqueria for another late lunch. We ate at Ramblero again, because we felt more comfortable with this bar, and we knew what we were doing, but it seemed busier today, with actual lineups by each bar. We ordered much more food this time...

As I mentioned in my last post, there are many fruit stands in La Boqueria, and many of them sell fresh fruit juice and fruit salad cups for €1. Perfect snack on a hot Barcelona day. Also, this is not an advertised fact (no signage to let tourists know), but if you keep your receipt from any purchase made in La Boqueria, you can use the restroom without paying. Otherwise, it is €0.50.

After our meal, we hopped back on the bus on the blue line. Our first stop was Sagrada Familia. We had tickets for the next day, and I wanted to familiarize myself with the entrance. The basilica is just amazing on the outside. Construction has progressed slowly since Gaudi overtook the project in 1883. As you can see in our photos below, it became an overcast kind of day. (More photos to come in the next post!)

Our stop was a quick one, and we got back on the bus for our next stop: FC Barcelona, a must-see for any soccer fan! The boyfriend is a soccer fan and he was excited to visit the massive team store. We decided against doing a stadium tour because we didn't have time, and it was expensive at around €35. The team store is like a department store as it has three levels full of FC Barcelona merchandise. We walk around Camp Nou and took some photos.

We caught the last bus back to Placa de Catalunya, and we walked around Las Ramblas. We had dessert (ice cream!), and it was almost midnight before we were hungry again. We decided to grab a quick bite before heading back to the hotel, but we wanted something quick and inexpensive. We spotted a restaurant called Txapela, and decided to give it a try. Their menu is extensive with over fifty different pintxos (similar to tapas, but these were bite-sized) to choose from. 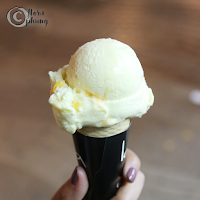 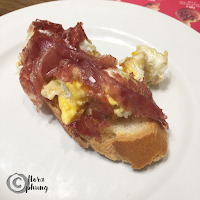 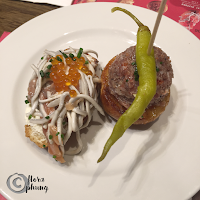 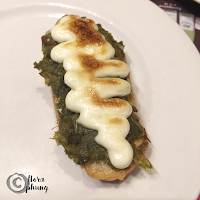 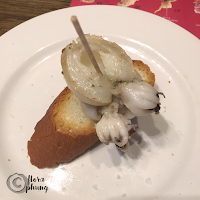 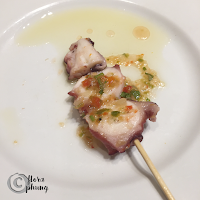 When we left, the night life was still going strong in Barcelona. All the stores were closed on Las Ramblas, but the restaurants were all buzzing full of people. We didn't get back to the hotel until well after midnight, and we were exhausted from our long day.

We had one more day in Barcelona, and we had saved the best for last. Stay tuned for our trip to Sagrada Familia. I hope you're enjoying our post-cruise trip report in Barcelona. We are at the end now... Thank you for following along!
Posted by Flora at 02:45